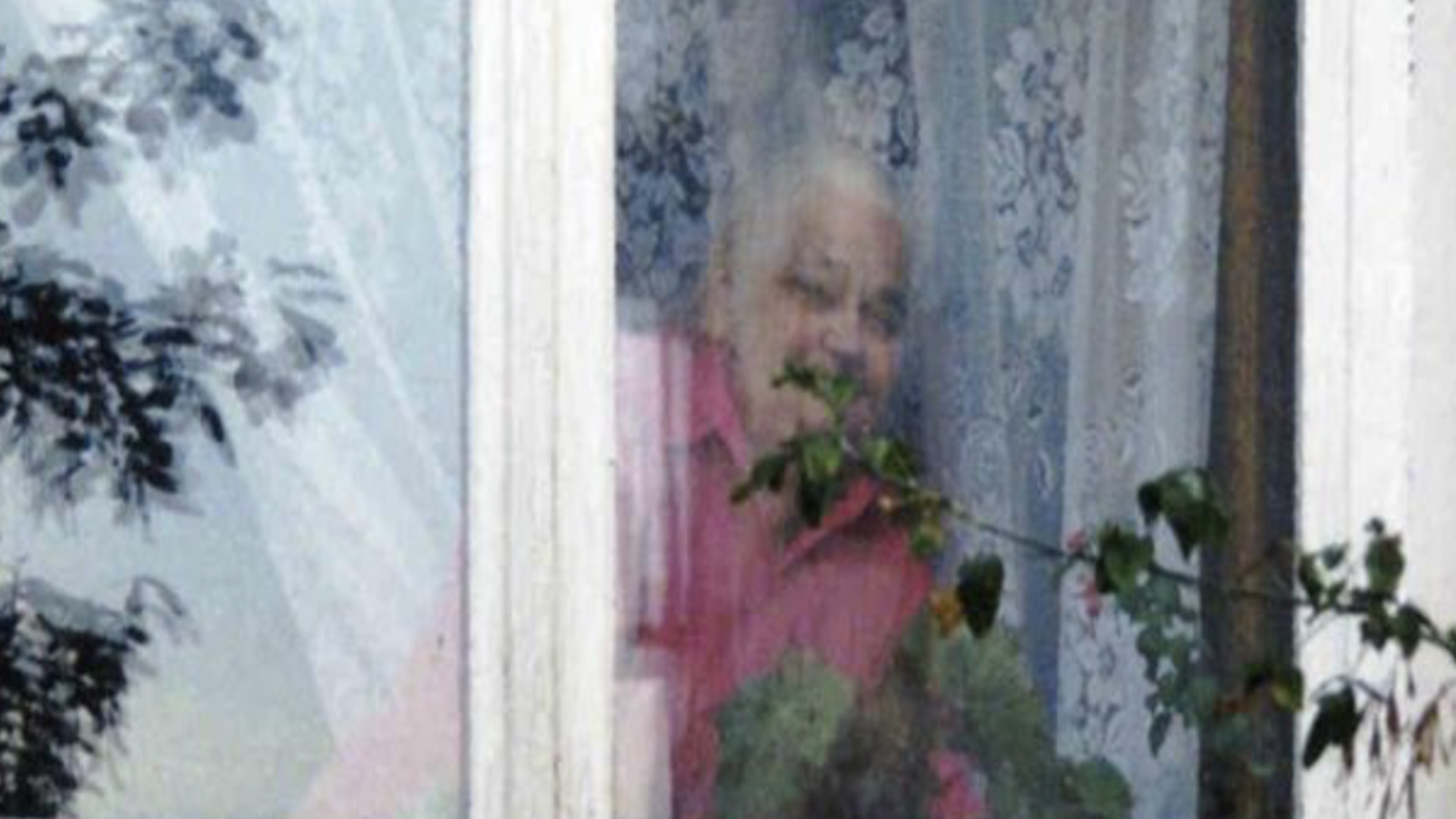 My summer vacation  in 1999 was longer and much different than any past vacation. A few days before leaving New York, I learned that my mother’s condition was very serious; she had cancer. Long weeks of waiting for the results of her medical test ended with devastating news. I had been flying to Poland with hope and joy, which now was being destroyed by a disturbing premonition: this would be my last vacation with my Mother. On the day of my arrival to Poland my mother left the hospital. My heart was broken when I saw Mother’s face changed by illness. Sobbing, Mother nestled in my arms; I felt she was looking for rescue in them. In my love, I wanted to renew her feelings of hope, joy and peace. But I knew, like my mother, that salvation in coming events can bring only He, who is total Love.

I wanted to do everything for my mother. Each day we shared together. We were very close to each other. Together we celebrated mass and made many trips. I stayed in hospital with her. I said mass in the hospital’s chapel in which my mother  participated. We had long conversations in the garden of the hospital. She laughed. She was happy. One day she remembered her feelings when her mother died at age 48. She felt that her life no longer made sense and she would not find happiness, but only endless sadness. As time went by, her joy and her hope were reborn. Through the mystery of the death and resurrection of Jesus Christ, my grandmother became a bright ray in the life of my mother. I’m not sure she told me this story accidentally, or she just wanted to prepare me and my sister and brother for the hard time after her passing.

Vacation with my mother went by very quick, although it was longer than my past vacations. Few days before my trip to New York the depressing consciousness of parting was with us. “I wanted to cry but not in the front of” Ryszard’- she said to her friend. The hardest moment was to come. Again my sobbing mother nestled in my arms. I don’t remember any farewell words, I remember only her last nestling in my arms. I left our house. Mother stayed in the widow. With tears she was watching me as I was leaving home. I stopped  and waved to my mother. Next pulled out camera from my travel bag and took a picture my mother in the window. It is the last picture of my mother: Mother in the window.

After I left Poland, my mother’s condition worsened daily. I desired to be with her during her remaining days. I was on the horns of a dilemma. I wanted to go to Poland, but my priestly conscious held me. My mother encouraged me to stay in New York. I stayed. I had a lot a conversations with her doctors; I was looking for any cure for her. I spoke with my mother almost everyday by telephone. During these conversations she told me that she felt very well. Later I learned that she didn’t want to worry me. When my sister or brother talked with me, she stayed close to them and listened to what they were saying. She wanted to protect me from bad news about her condition.

I wrote her letters using large type which she could read without eyeglasses. The last letter I sent was on October 18. In it, I wrote: “Dearest Mom, during our last conversation I told you about the possibility of your coming to America for treatment. Right now you are staying in a good hospital in Lublin, but I would like to have you close to me and in a good hospital too. Currently we have to be thankful because you  are stronger day by day. Don’t tell me how you can repay me. You gave my brother, sister and me a lot more than we could ever repay. I’m very happy when I can do something for you. I would gladly give everything up for your happiness. Henia and Józef feel the same as I do, but they don’t express themselves. I am accustomed to talking and to writing and, for this reason, it is easier to for me to express my love for you.

With all my love

My mother never received this letter. Two days later there was telephone call telling me to prepare for a trip. My mother had passed away. The same day I was on an airplane flying to Warsaw. It was a time of remembrance. Each memory fell down in each drop of tears. Through these drops I tried to find my mother’s new presence in my live. I’m sure she is alive in the power of Love which saves us from death. But it was very difficult to accept her new presence when I didn’t feel the touch of her hand, radiating with love and see her blue eyes full of endless trust and pure happiness.

I began to talk to my mother. I made her think of her pilgrimage to the shrine of Our Lady in Krosnobrod. Before I came into this world, I had already made a few pilgrimages to the shrine. She would kneel before the miraculous picture of Our Lady and asked God if the child she was ”bringing under her heart “ were a boy, to grant the priestly vocation to him. God heard her prayer. Twenty five years later I received the sacrament of ordination. She implored God and he gave the priestly vocation to her son. She than did everything to support this vocation. I remember our walking to the Church. It was a long and sandy way. It was too much for small children. Our mother would carry us in her arms and brings us to the church. Where did she get such strength?  She worked very hard, her day was always full of activity. She got up before sunrise and she worked after sunset. She was sewing clothing and knit sweaters for us. She wanted to gives us everything we needed. In this busy life she kept joy and a strong faith in God.

Many years later she stood before the altar on which I said my first mass. I’m looking at photographs of this mass. My mother is crying, but the tears are the tears of joy, happiness and love. This love she will keep in her mother’s heart forever. Always  my brother priests and I experience this love.

Gazing at the sky with millions of stars, I continue conversations with my mother. We talk about her visit to me in America, and the plans we had made to travel to the Holy Land for the Jubilee Year . In the time before her death, she had more time for travel. Earlier she had cared for her father and later her husband. I wanted to reward her sacrifices,  but it would be as nothing compared to the reward which God had prepared for her. There were many conversations like this. Slowly and painfully, a new form of coexistence was rising. But I need more time for this coexistence to become the source of joy, joy which would have no end, when we will meet each other in the House of Our Father.

During my mother’s funeral mass, I spoke about a mother who used to watch her children from the kitchen window as they played in the back yard. She could see almost every part of the yard. She could see any strangers or animals that might be dangerous. Knowing she was watching , the children felt safe. One evening as her family gathered for prayer, especially to thank God for His blessing, their little three year old almost shouted out: “And thank You, God, for Mommy in the window”. Like this boy, I would also like to say: “Thank You, God for my mother in the window of the kitchen”. She was an icon of the most beautiful love. I wanted to thank God for a mother in heaven’s window. I believe that she looks at me from this window and worries about her children as she did  in her earthly life. She is very close to God, she can ask God for everything that we need. Right now she lives in another reality,  out of our time and space and, for this reason, nothing can separate us.  We can be together.

A  few days later, after her funeral I came back to New York. At the airport in Warsaw, a customs officer had X-rayed my travel bag and asked me: “Is this icon in your bag precious?” He saw my surprise, and asked again: “Is this an antique icon which cannot be taken out Poland?” I answered: “I don’t have an icon”. He shows me the image on the monitor. I open my bag. The customs officer pulled out my mother’s photograph in a metal frame. It looked like an icon on the monitor.

Yes, it is for me the most precious icon. This icon is painted with the most beautiful colors, the colors of Mother Love.